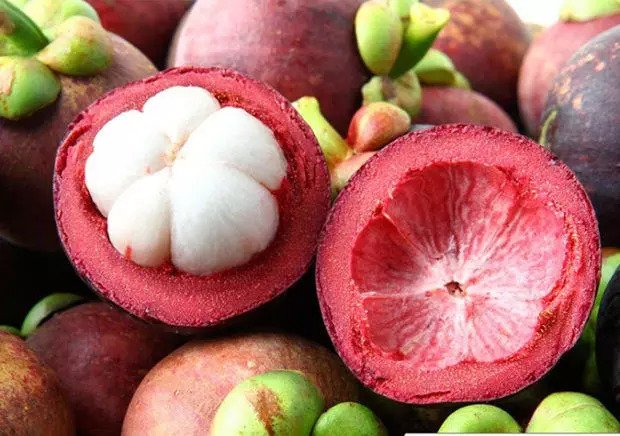 Vietnam is one of the planet’s exotic fruit meccas. The sheer variety of juicy, sometimes sweet, sometimes sour, but always healthy natural goodness that you’ll find in pretty much any food market at bargain prices is impressive. Coming mostly from Vietnam’s ‘rice bowl’, the Mekong Delta, these delicious snacks are also sold by a plethora of street vendors.

Taste all of them, as the exotic flavours and textures are something you simply won’t find back at home. In order to show you through the wonders of Vietnamese fruits, we’ve put together this top five ranking of the most delicious fruits any Vietnam traveller seriously must try, along with helpful information about health facts, prices and seasons. 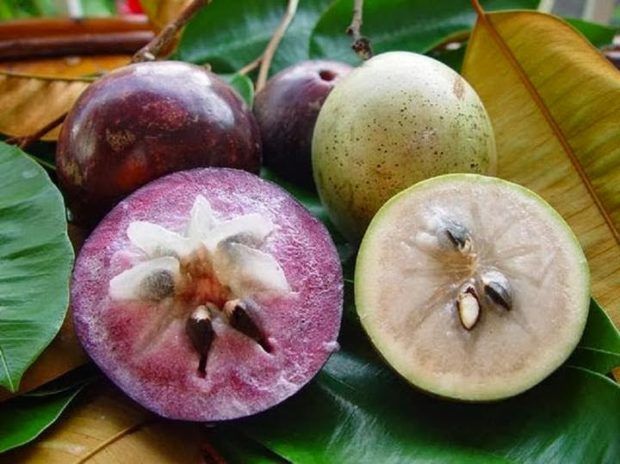 No, not star fruit, star apple. Cut this tennis-ball-sized fruit in half horizontally and you’ll know why it’s called that. The segments form a star-like structure. Its Vietnamese name, however, is much more accurate: vú sữa literally means breast milk. A bit odd, I know… However, this is the colour and texture of the juice you should expect. Vietnamese actually just cut in a hole and suck the nectar out!

Don’t worry, you can halve it and use a spoon, or cut the fruit in wedges and enjoy it like a tiny watermelon. The fun lies both in the taste and in the texture. There’s a sticky sweetness to it which, combined with the thick, milky juices indeed makes you feel some motherly love.

Vietnamese legend has it that at witching hour, you can see the ghost of a mother feeding her baby roaming around its trees. Spooky, huh? So better let somebody else harvest them and buy a bagful from a street market when it’s in season in the late autumn and early winter months.

It’s easy to spot with its round, mostly purple skin. Some are green though, but this doesn’t mean they’re not ripe yet. Do softly squeeze it before enjoying the star apple to set free all the juicy goodness, and bring a wet tissue as your fingers are sure to be sticky after eating it!

Star apples help at digesting, make you lose weight, are rich in antioxidants and vitamin C and strengthen your bones.

You only get it from October to December.

It’s a tropical fruit, so it likes the heat in Southern Vietnam. The most famous varieties come from the Mekong Delta: Can Tho and Vinh Kim Commune in Tien Giang Province. 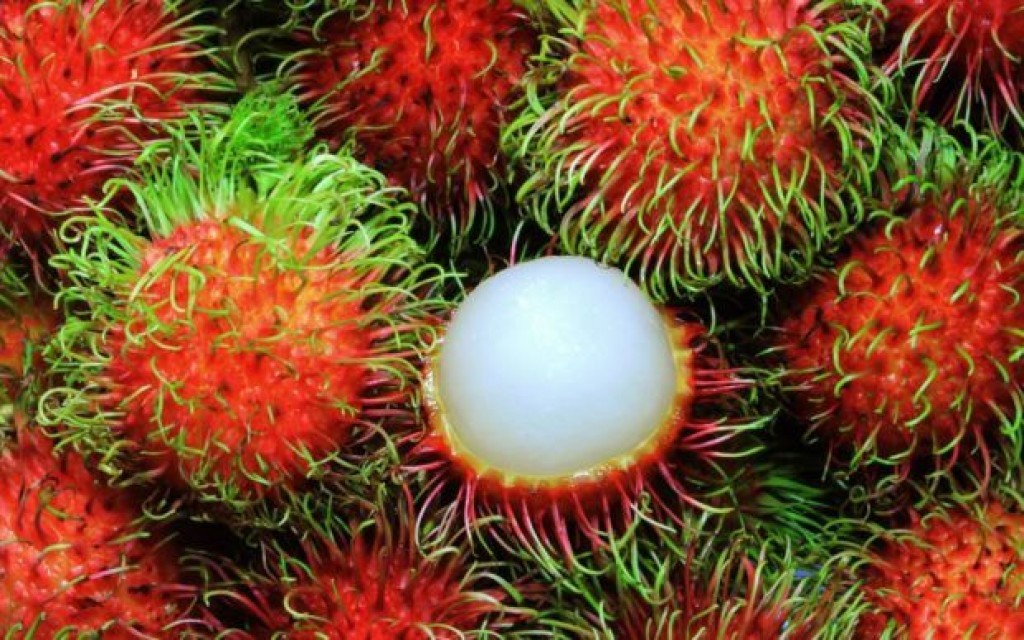 Cute, the Vietnamese name, right? It gets even cuter when you know what it means: messy hair! However, there is also a smaller kind with shorter hair which is called chôm chôm nhãn in Vietnamese and tastes a little sweeter.

The golf-ball-sized rambutan is a relative of the lychee, just to give you an idea of the texture that, however, is slightly more jelly-like than that of its brother. There’s also more flesh. You might come across some sour specimens, but rambutan is generally sweet and extremely pleasant to eat. What’s more, it is also a convenient fruit!

You can use your finger to open and peel off the skin, but the most elegant way to do it is to cut the skin in half and pull off one hemisphere while holding on to the other. You can now slip them into your mouth as a whole without getting your fingers sticky. There is a seed though—don’t choke, please!

As they grow on branches, they’re often sold on those which adds to their volume. You’ll find them fresh from June to September on any street market. Alternatively, stop one of the many vendors cruising around the cities on their bicycles. These vendors, however, tend to mark up some compared to the market prices as you’re likely never to see them again. Time to bargain!

Rambutan are great to lose weight, good for your skin and hair and have a lot of vitamin C. They also strengthen your immune system, prevent cancer and—drum roll—are said to improve sperm quality! Whatever that is supposed to mean…

The rambutan is a summer fruit that gets ripe during the rainy season. Harvest is from May to September.

The most well-known yields are at Binh Hoa Phuoc Village in the Southern Vinh Long Region. Yes, this is the Mekong Delta again. The area around Phan Thiet on the south central coast is also famous for delicious rambutan. 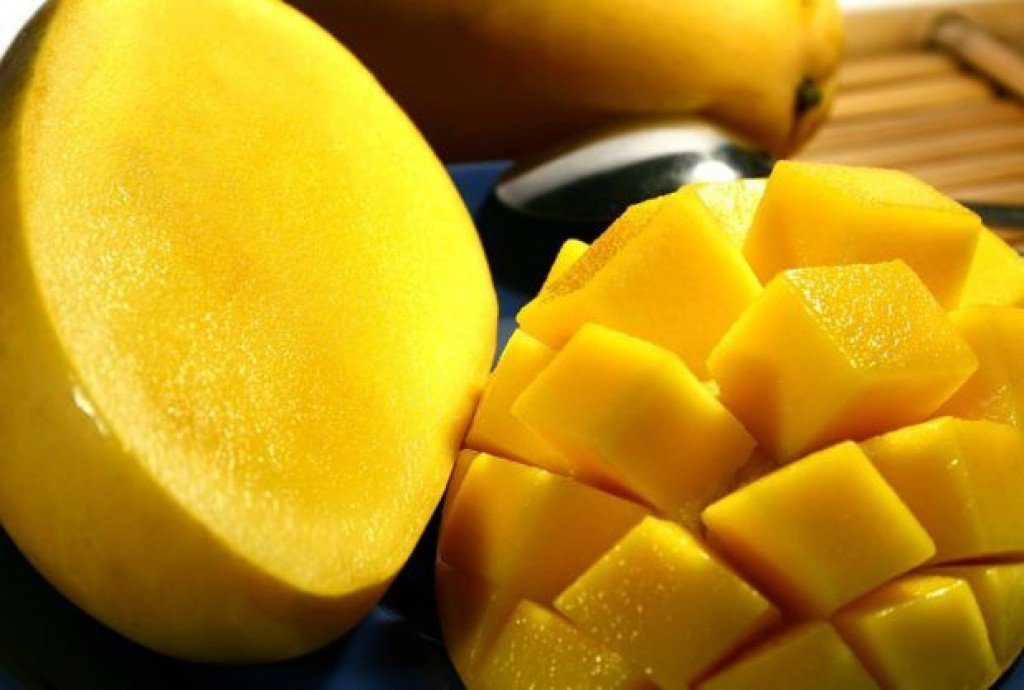 All right, this doesn’t come as a surprise. But isn’t it true that the imported mangoes you get in the colder world regions’ supermarkets are not even close to being as delightful as the ones in tropical countries? Vietnam is no exception to this.

On the street, you’ll mostly find green, unripe mangoes cut into sticks and sold with chilli salt, to a point that many tourists come back home saying that mangoes in Vietnam are terribly sour and unenjoyable! They couldn’t be more wrong.

The Vietnamese soil is so fertile that it produces an incredible number of mango fruits. You just can’t wait for them to be ripe or you’ll leave half of them rotting because, as good as they are, five per day are at least two too many.

So the Vietnamese have found ways to process them while they’re still green. Do not, honestly DO NOT miss out on Vietnamese mango salad with fresh shrimp! It typifies the genius of Southeast Asian cuisine (you’ll find similar creations in Thailand, for instance).

Once ripe and light yellow in colour, Vietnamese mangoes are delightfully sweet and full-bodied. The texture of the ideal mango is only slightly firm to the bite and so flavour-bursting that you just don’t want to stop eating them!

As tempting as an American-football-sized mango might be, better pick the smaller but fragrant ones. While on the market, take them in your hand to test if they have a slight softness to them. If so, and if they’re not too green, you’re likely to have found one you can eat right away.

As they have a massive pit, use a knife to cut off one slice on each side of it. You can then either make them into sticks or into cubes (the trick here is not to cut through the skin).

Mangoes help prevent cancer, lower your cholesterol, are beneficial to skin and eyes and boost the immune system.

Mangoes grow from October to July, but taste best in the early summer months.

There again, in the Mekong Delta. There are several kinds, the most famous of which is the Hoa Loc mango from the commune formerly called that, located in Tien Giang Province.

Unlike other fruits (think: dragon fruit), langsat are neither world-famous nor appealing at first glance. They rather look like little potatoes. However, we’ve ranked them second-best. Why so? Open one and you’ll know!

Another member of the same family as the rambutan, the flesh of this small fruit the size of a bigger quail egg is translucent and soft, with several segments carrying a seed. You can totally chew and swallow the smaller seeds to avoid spitting out every two seconds. It won’t spoil the taste, promise!

What taste is that? As sweet and succulent as its Vietnamese name (bòn bon) announces, with a subtle hint of sourness that reminds one of a grapefruit. It’s also called dâu da đất in the North, but it’s nothing like a strawberry (dâu), more like a juicier, more intensely flavoured lychee.

You won’t be able to avoid using your hands to peel it, which will leave them so sticky only several hand-washings will help. Better not let it touch your clothes!

There again, you’ll usually buy them on branches. Make sure not to confuse them with longan, which are also great, but not as great. Longan are round while langsat look more like a drop of water.

Langsat help reduce weight, prevent cancer and improve digestion. They are also a source of carbohydrate. Not that you’ll actually do it, but: dry the peel and burn it to repel mosquitoes!

Harvest time is in late summer, between July and October.

In Quang Nam Province, the south central coast region that is also home to Hoi An.

Hands down, this is the best fruit in Vietnam, and perhaps in the world. Back in the good old feudal days, it was famed as a noble fruit in Vietnam and offered to the royal family—and for a reason!

It doesn’t show its greatness at first sight. You have to cut it along the equator of its dark red rind to unveil the milky-white, segmented core. It is said the more segments and the less seeds a mangosteen has the better the taste is. And what a taste that is!

The tangy flesh perfectly balances sweet and sour to first surprise, then delight you. Imagine biting in a strawberry, a peach and a clementine at once. Its juices give it an unheard-of freshness that just makes you want more and more.

You’ll have to indulge within the borders of the country, though, as there are restrictions on imports and exports of mangosteens.

And there’s another downside to it: as the Vietnamese say, buying mangosteens is like buying a lottery ticket—you can never be sure what you’ll get. Often, more than half of the purchased fruits go to the rubbish as you shouldn’t eat them when they’re interspersed with yellow or purple fibres. But that should definitely not keep you from taking your chances.

Mangosteens are very popular in Vietnam and can be found pretty much anywhere from the grocery store around the corner to the major street markets or a legion of street vendors on bicycles. Note that, perhaps due to their royal past, mangosteens are a bit more expensive than other fruits.

Mangosteens have a lot of antioxidants and vitamin C, reduce cholesterol, are anti-inflammatory and have an anti-ageing effect.

The mangosteen season is short, just about two to three months from May to August.

Lai Thieu mangosteens from a little town in Binh Duong Province north of Ho Chi Minh City are said to be the best of the best.

You don’t agree with our ranking? Discuss with us in the comments section or in our Facebook group! 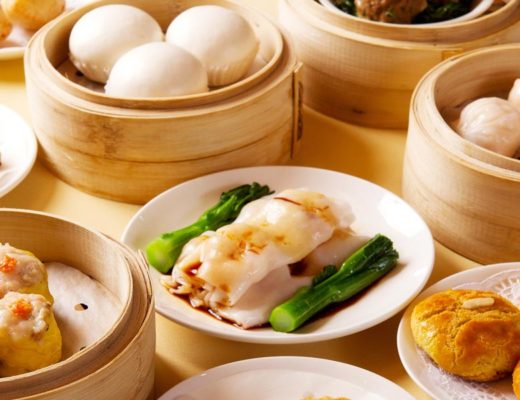 THE CANTONESE INFLUENCE ON VIETNAMESE CUISINE